Being a Good Christian or Salvation

Often times people get caught up in the Christian religion for different reasons. Christianity was termed once Jesus died and rose from the dead and His disciples went abroad spreading the message of the coming kingdom of the Messiah and the kingdom of God. What has been unknown to most people is that this Gospel had been out since the beginning of mankind. Since Adam and Eve, this gospel have been preached unto mankind; it is just that when Jesus the Messiah actually came into the flash, live and died for the sins of mankind, this is when people really starting to understand the Christian concept.

Once they understood the Christian concept they decided to turn Christianity into a religion. However those with really good understanding know that Christianity did not begin some 2000 years ago as supposed, Christianity began when man was created and according to Scripture that is when Adam was placed on the earth after being dug out of the earth and the breath of life was blown into his nostrils.

What’s It to You: Being a Good Christian or Salvation

People have equated Christianity to being like Jesus Christ and have thought the only thing they need to do is to live the way Jesus lived. It is relatively simple to live like someone but still completely misunderstand what that person’s message or purpose was and/or is. It’s called modeling. I can model my behavior to be like that person, but still completely not truly understand what they were or are doing.

There have been a lot of kids who played basketball and they grew up trying to be like Mike. They were able to walk like Michael Jordan, talk like him, play basketball like him, but they never met him and they never understood what Michael’s overall goal and message was on the basketball court. Likewise, we have Christians who understand the model of do unto others as you would have them do unto you and that mankind needs to be nice to each other and have charity, and the care for the poor mentality that Christianity demands of those who want to be like Jesus Christ.

Being a Good Christian or Salvation – Which Do You Strive For

Nevertheless many Christians miss the entire concept of what being a Christian is all about. Being a Christian is not just about being a good person (although this is vitally important), because of being a good person can still lead you to an eternal death. The most important aspect of Christianity is to understand in salvation or the redemption message. As we come to the understanding that the entire message and the entire goal is to seek salvation through Jesus the Christ, which will reconnect and to bring us closer to the Father, it is then and then only will we completely understand what it is to be a Christian.

Being a Good Christian or Salvation

Understanding the salvation that we are seeking is to understand that we have sinned and have fell short of the glory of God. Therefore we must work earnestly to be salvage by the blood of Jesus Christ for the remission of sins for access back to the tree of life, which was taken away from us in the garden of Eden. 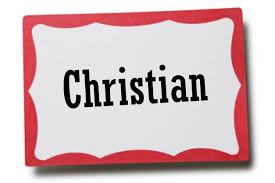 Therefore it is not enough to be a good Christian you have to be one who keeps the Commandments of God and have the testimony of Jesus Christ and when we have this combination this is when salvation and the process for us to be salvaged by the Father through Jesus Christ will commence. Then we will understand Christianity and the purpose and enter into the Covenant of Peace and Eternal Life through Jesus Christ.

Are you up to speed on what is going on in Jerusalem? Do you know what all the middle east commotion means? If not, we urge you to join our newsletter so that you can receive emails from us, not only for Bible studies, but for prophetic news that are so vital these days! Sign up Today … put your name and email in the form to the right side of this post (scroll up and voila) or right below!

Also, read our book and share it with others! The 7 Great Lies All Christians Believe … Even the Good Ones is an exceptional educational, spiritual read that will help you with future Bible Study as you pay attention to detail! Get your copy today!