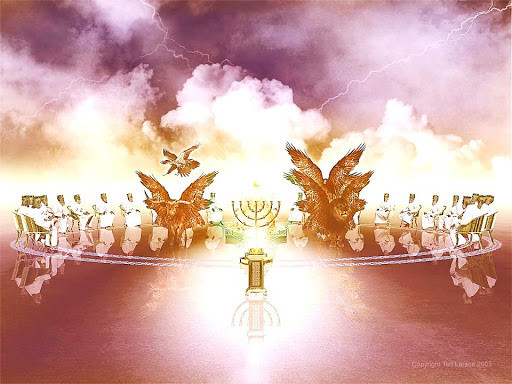 I Will Shew Thee Things Which Must Be Hereafter

22 He that hath an ear, let him hear what the Spirit saith unto the churches.

1 After this I looked, and, behold, a door was opened in heaven: and the first voice which I heard was as it were of a trumpet talking with me; which said, Come up hither, and I will shew thee things which must be hereafter.

2 And immediately I was in the spirit: and, behold, a throne was set in heaven, and one sat on the throne.

3 And he that sat was to look upon like a jasper and a sardine stone: and there was a rainbow round about the throne, in sight like unto an emerald.

4 And round about the throne were four and twenty seats: and upon the seats I saw four and twenty elders sitting, clothed in white raiment; and they had on their heads crowns of gold.

5 And out of the throne proceeded lightnings and thunderings and voices: and there were seven lamps of fire burning before the throne, which are the seven Spirits of God.

6 And before the throne there was a sea of glass like unto crystal: and in the midst of the throne, and round about the throne, were four beasts full of eyes before and behind.

In these seven verses, the angel completed the message to the church of Laodicea; he that has an ear, let him hear what the Spirit said to the churches was the last warning. The remaining six verses of the seven ventured into chapter four, the first six verses.

John took a moment to look around and he saw a door opened in Heaven. Many voices were heard, but the first voice that he heard sounded like it was a trumpet speaking to him. He could understand the speech in his language and it said to him, “Come up here, and I will show you things that must be hereafter!”

This was the invitation from Jesus’ angel to share with John what will take place in time from the moment they were in, until the end of the age. John was immediately in the spirit; he was in a deep vision that showed him things to come.

He saw a throne, it was set in Heaven and Someone sat on the throne. The One who sat on the Throne was like jasper and sardine stones to upon; He was shining and glistering. In addition, there was a rainbow swirled around the Throne giving it the look and appearance of an emerald (see emerald in the link).

The Seven Spirits of God

Standing around the throne in like a circular manner were twenty-four elders; they also were seated and they wore white raiment (robes). The twenty-four elders wore gold crowns upon their heads, indicating they were governors and/or rulers!

From the throne, John could see flashes of lightning, thunderings, and voices. Seven lamps of fire burned before the Throne also, which were the seven Spirits (angels) of God (from Revelation 1:20). Before the throne, there was a sea of glass, like a crystal.

In the middle of the throne, more closely around the Throne (closer than the twenty-four elders), there were four beasts full of eyes who stood before and behind the One who sat upon the Throne. There are a couple of things to consider in these seven verses; one is when did this take place?

Two, did John see this image or vision in realtime or was he shown a projection of the future? Most elect scholars will assert this vision was a future telling, as the Angel declared in the beginning (“Come up hither, and I will shew thee things which must be hereafter.” – emphasis mine).

Therefore, it was realtime but projected the future as Jesus the Messiah sat upon His Throne; He sat with twenty-four elders from Israel* around Him. Ultimately, we just got a view of the LORD’s board room! Seven verses!

* The twenty-four elders were from the tribe of Israel; difficult as it may be to prove, we can share this with you.